In a report on the killing of 9 children by NATO forces in Afghanistan the BBC chooses not to provide details of the attack, highlights NATO’s apology for the deaths, seeks to deflect attention by highlighting killings carried out by the Taliban and refers to the children simply as ‘civilians’. 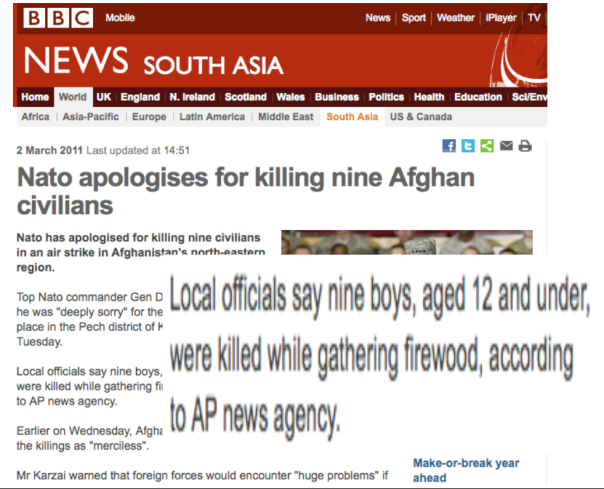 Not only does the BBC choose to describe the victims simply as ‘civilians’ in the headline, but the first paragraph also refers to ‘civilians’. It is only in the third paragraph that we learn what NATO are apologising for:

“Local officials say nine boys, aged 12 and under, were killed while gathering firewood, according to AP news agency.”

But even here, the deaths are claims assigned to unnamed officials, relayed by a news agency. There are no links to other reports offering further information on the attack. Few details of the circumstances, no names of those killed and no response from members of their community. It is the apology, not the deaths, that is the story.

The BBC euphemistically refers to the killing as an ‘incident’, and, it seems, given the remainder of the report, the deaths are simply incidental to the greater aims of the war:

It’s almost as if Petraeus is using the opportunity to apologise in advance for future killings in order to dispense with the rigmarole of formal apologies and the (very limited) bad press that comes with that.

Despite the fact this report deals with the killing of 9 children by NATO forces, the BBC’s rules of ‘impartiality’ requires it to note that NATO comes only second in terms of killing civilians in Afghanistan:

“Afghanistan Rights Monitor said the Taliban were responsible for about 60% of the 2,400 civilians killed, while US-led forces were accountable for 21%.”

A fact the BBC’s Jill McGivering felt the need to reiterate in a follow-up report:

“Washington is well aware of the strength of feeling and has worked hard to reduce casualties, she adds, though Nato says most civilian casualties last year were caused by Taliban insurgents, not the security forces.”

And again in this follow-up report ‘children’ are ‘civilians’.

On the other hand, there are many examples on the BBC News site where children’s deaths are deemed worthy of foregrounding, generally though, those deaths are caused by designated enemies: 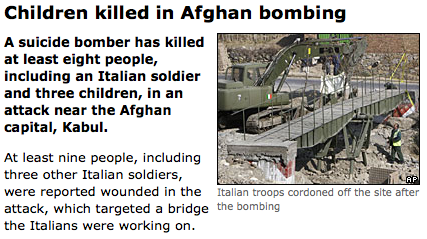 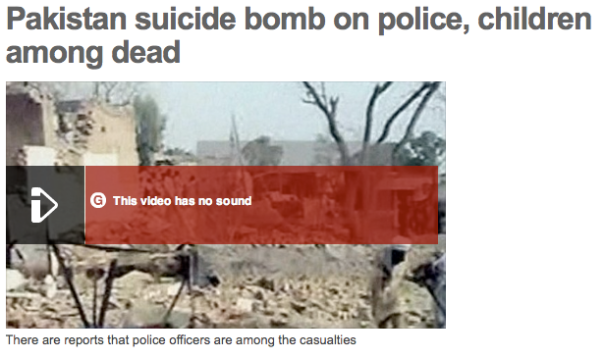 Thanks to @colettebrowne for spotting this.

During last nights excellent discussion hosted by Leviathan Political Cabaret the question was raised as to whether the media has been instrumental in creating the storm over the Florida pastor and the religious book burning. The New York Times had a good think about it yesterday and Juan Cole posted a list of the ‘Top Stories More Important than Quran-Burning Nut Job’ today.

But the Irish Times gives a perfect example of how media priorities shape not only our perception of the world, but the political energy devoted to the issues reported: 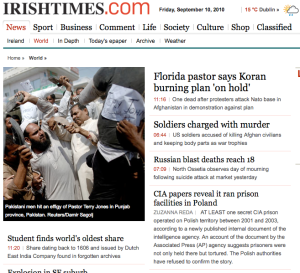 The caption beneath the photo reads:

and just to the right of the image is a link to a story titled:

Twelve US soldiers have been charged with crimes in Afghanistan ranging from murdering civilians to keeping body parts as war trophies.”

A more detailed report on which can be found at the Guardian.

They could also be giving the front page to cancer rates in Fallujah, but they’re not.

This latest MediaShot is an extended response to this criticism of our previous MediaShot ‘The false reality of news journalism’ – Reporting Palestine and the Mavi Marmara. 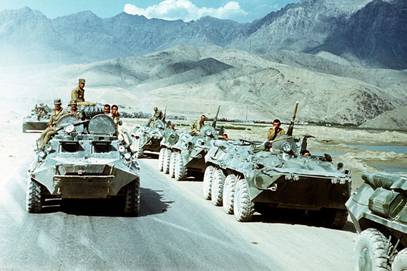 An Editorial in today’s Irish Times brings readers bang up-to-date on the US war on Afghanistan.

We are told “NATO…are quietly scaling down their commitment to it ahead of withdrawing troops,” while the US and UK are still willing to give military means one last chance before the inevitable “political negotiation with the Taliban.” As the costs continue to rise, their critics are not so confident, saying “it is time to scale down ambitions there and to reduce and redirect the military effort.”

Afghans are in agreement, they “do not want Nato there and support efforts to reach a political deal with the Taliban, based on the assumption that it is not a unified resistance run by al-Qaeda, but a coalition of regional and local opponents who could be attracted to an alternative path.”

An ‘assumption’ supported by at least one “western official” in Afghanistan, who said in 2006:

“The name “Taliban” may be misleading, he explained – as certainly is the assumption that its insurgency is a simple black and white struggle of foreigners versus fundamentalists. “This is about narcotics, corruption, tribal tensions, warlordism, illegal armed groups, Arabs, Iranians, Chechens – and all of these factors are interrelated. You never know who you are dealing with. You probably have some guys working for good and bad at the same time.” [July 4, 2006]

The US legacy to Afghanistan is summarised as follows: “rampant insecurity, endemic corruption, widespread poverty and weak government.” Along with the possibility of “a new civil war” potentially resulting in “an effective partition between the north and south of the country, which could make parts of it even more of a haven for international terrorism.”

Long gone are the days when anti-war activists (the vast majority of the world, including Afghans) had a say in the matter, even if the reasons for their objections became entirely bastardized when squeezed through the journalistic editing process practiced at the Times: “They were never going to be convinced it could work, or convince a country that believes it has a right to strike back.” [October 10, 2001]
Another useful omission is the purpose of the whole bloody venture. The purpose of the war, which has gone through countless improbable iterations, now seems to be the idea of a courageous defeat, following Obama’s unfulfilled lofty ambitions of “reveres[ing] the recent impression of slow defeat or stalemate.” But lest we forget the original motive, finding and killing Osama bin Laden:

“The United States-led military riposte so intensively under preparation since the terrorist attacks on New York and Washington on September 11th is now under way. A formidable force has been assembled to attack bases in Afghanistan used by the al-Qaeda organisation and its leader, Osama bin Laden, and the political and military infrastructure supporting them.” [October
08, 2001]

“Nearly three weeks on from the beginning of the US-led military campaign against Afghanistan it is clear that its objectives are increasingly difficult to attain. There is little sign that the Taliban regime is close to collapse. It is proving difficult indeed to assemble an Afghan coalition that might replace it. The search for Osama bin Laden and his al-Queda organisation, blamed by the United States for the atrocities in New York and Washington on September 11th, has so far proved fruitless.” [October 26, 2001]

“It should be remembered that even if a major transition is successfully engineered in Afghanistan as a result of these events the objective of bringing the perpetrators of the attacks on New York and Washington to justice remain to be achieved. The chief suspects, Osama bin Laden and his al-Qaeda organisation, are still at large.” [November
14, 2001]

The “military victory” of this “this short war” “demonstrates the awesome effectiveness of modern US air power accurately deployed.” “It will allow the US-led campaign in pursuit of Osama bin Laden and his al-Qaeda organisation to go ahead unhindered and maybe successfully.” [December 7, 2001]

“The 18,000 US troops still deployed have failed to find Osama bin Laden despite inflicting huge casualties on his supporters.” [November 21, 2006]

No Weapons of Mass Destruction and no dead bogeyman. That’s 0 for 2 for the US military, unless that is, they had an ulterior motive?

[Image via Wikicommons “Pullout of Soviet troops from Afghanistan. 1988. Photo by Mikhail Evstafiev.”] 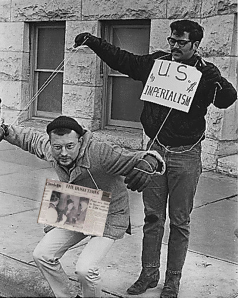 Today’s musing by the Irish Times Editor on the US government’s grand intervention in Afghanistan is a quick lesson in subservience to power.

The entire context of the editorial is fixed within the conceptual frame prescribed by the Pentagon, the war is a “counter-insurgency”, where Afghans are the insurgents and the invading foreign troops are the counter-insurgents.

The current military approach is opposed by European and US critics, not because “the Afghan people do not want us there,” but on the grounds that it is believed to be “unachievable” or, according to the more optimistic Editor, just “difficult to achieve.”

In much the same way “Soviet leaders and commentators criticised and debated, not the fundamental +illegality+ of the invasion, but the merit of the +strategies+ for achieving its goals” during the Soviet occupation of Afghanistan:

“Soviet Chief of General Staff Ogarkov argued in 1979 (before the invasion), that the decision to send troops to Afghanistan was “inexpedient” because the initial invasion force of 75,000 was insufficient to the task, which was to “stabilise the situation in Afghanistan.” It was “impossible to achieve this goal with such a [small] force”, he claimed. (Quoted, Lyahovsky & Zabrodin, 1991, p.59). General Gareev, a top Soviet advisor to the Afghan armed forces, argued in his memoirs that “from the military point of view, it was perhaps more advisable to conduct a more massive and powerful invasion of Afghanistan”. (Gareev, 1996, pp.45-46)” [Nikolai Lanine and Media Lens,
INVASION – A COMPARISON OF SOVIET AND WESTERN MEDIA PERFORMANCE]

The US plan, we are told, “combin[es] aggressive forward engagement with a campaign to win civilian support through social and community programmes and trying to limit civilian casualties.”

So we are to believe US objectives amount to subduing the resistance (simply branded ‘the Taliban’) and attempting to ‘win the hearts and minds’ of the locals, as if there were no great US strategic and economic interests in Afghanistan other than undermining the Taliban (who will eventually be bargained with) and building a few schools.

Which is funnily enough exactly what the Soviets were up to too, as Pravda explained: