In today’s Irish Times’ Colm Kenna has an opinion piece titled ‘Public reaction to advisers’ pay indicates need for leadership‘ where, after threatening to say something interesting, he essentially goes on to say that we, the public, are distracted by trivial matters. Therefore it is the government’s responsibility to show ‘leadership’ in addressing those trivial matters in order for the public to have full confidence in them to do ‘what needs to be done to get us out of the mess we are in’.

So, instead of wasting your time reading that, read this instead:

Some burglars will try to trick their way into your home. A distraction burglary is where a bogus caller to your home gains entry on a pretext / lie or creates a diversion so that an accomplice can sneak in separately.

What does it feel like to live in a kleptocracy? How would you know if you lived in one? Here are a few pointers.

Media Lens recently explored the UK media reaction to news of Julian Assange’s bid for asylum in Ecuador. Their Alert exposed an embarrassing example of groupthink among an already visibly introverted Twitter clique, comprised of an array of liberal journalists from the country’s respected broadsheets.

In their haste to “groan with each fresh turn of the story” (as the Guardian’s readers editor described the prerogative of Assange’s detractors) few journalists bothered to address the substantive issue of the threat of extradition to the US. They instead framed the asylum bid as a ploy to avoid questioning over sexual assault allegations in Sweden.

Rather than a ‘groan’ this ‘fresh turn’ triggered an avalanche of abuse and ridicule directed at Assange, with journalists attempting to out do one another in a show of radical on-message-ism. 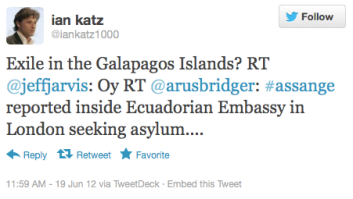 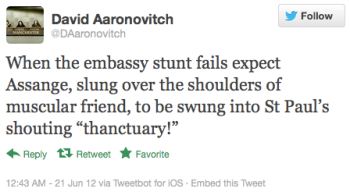 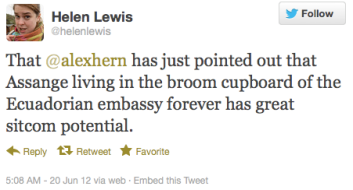 The lurid nature of the commentary cited in the Media Lens Alert stands in stark contrast to the professional hesitancy typically displayed in print, and perhaps hints at what lies between those carefully crafted lines. These interactions are more suggestive of private exchanges between colleagues at the proverbial water cooler, dominated by fact free or counter-factual mockery. Bluntly referencing the antagonistic history that has been the relationship between Assange and the British press.

“Comment is free…but facts are sacred” proclaims the headline banner on the Guardian’s comment pages, yet in this particular case, they were conspicuous by their absence.

Even George Monbiot, a journalist who is well known for meticulous footnoting, demanded only a cursory review of whatever evidence his Twitter followers put in front of him before passing judgement. A method of investigation potentially hampered by his habit of ‘blocking’ people who disagree with him, MediaBite included. 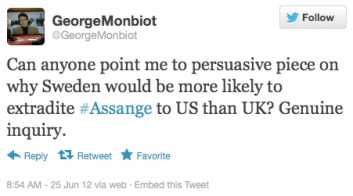 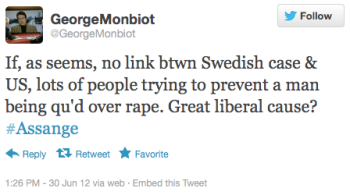 A perspective which just so happens to comfortably align with that of his editor-in-chief:

“the Guardian’s editor-in-chief, still supports many of the principles of WikiLeaks and would support Assange in any attempt by the US to extradite him over the release of the cables”

But it would be unfair not to mention those instances where journalists attempted to back up the vitriol with those ‘sacred facts’. New Statesmen writer David Allen Green made numerous threats to outline the legal thesis that undermined Assange’s fears of extradition to the US, however they came to nothing. His hastily penned blog published soon after Wikileaks’ Twitter account announced Assange’s arrival at the Ecuadorian embassy constituted his singular offering to the New Statesman’s readers, reflecting closely the tone of his tweets on the subject:

“It appears to me that Assange’s ploy is just another desperate stunt to frustrate and circumvent due process for investigating these allegations.” [David Allen Green, New Statesman, 19/06/12]

In the end it was left to the Guardian’s Nick Cohen to step up to the plate. Cohen, a liberal apostate (think Hitchens without the conviction), who threw his reputation on the bonfire that was Tony Blair’s invasion of Iraq, is highly regarded in the British press and his piece on Assange was well received by colleagues: 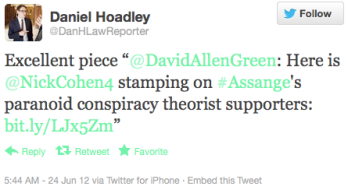 However, there were gaping holes in his argument, which relied on a (perhaps purposefully) farcical understanding of US politics and law. His article was all the more strained by the simply ridiculous attempts to denigrate advocates of opposing positions, such as Salon journalist Glenn Greenwald, who Cohen referred to as Glenn Beck’s “mirror image on the American left”. Cohen wrote:

“American democracy is guilty of many crimes and corruptions. But the First Amendment to the US constitution is the finest defence of freedom of speech yet written. The American Civil Liberties Union thinks it would be unconstitutional for a judge to punish Assange.” [Nick Cohen, The Guardian, 24/06/12]

A day later Forbes contributor, Mark Adomanis, described Cohen’s grasp on US law and its relationship with politics and power:

“How is it possible for anyone, let alone a someone who is employed as a professional political commentator, to think that the ACLU’s opinion carries any weight whatsoever? How shockingly naive or uninformed do you have to be to think that Obama, or anyone else of consequence in Washington, gives a half a whit about the ACLU?

Will Julian Assange be tried by the US government? I don’t know, and neither does Nick Cohen. But what I do know, what should be quite obvious, is that the ACLU’s opinion on the constitutionality of such a prosecution is about as relevant to whether or not it will occur as the price of fish food in Seattle, traffic conditions in Vienna, or Cliff Lee’s WHIP.” [Mark Adomanis, Forbes, 25/06/12] 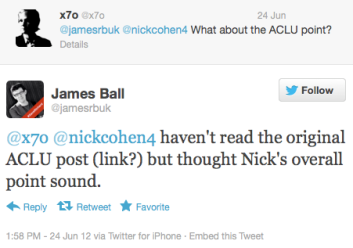 Facts are clearly not sacred when it comes to certain issues and certain people.

Two days later, a funny thing happened. We were provided a perfect case study for comparison. The owner of the London Evening Standard, a free sheet masquerading as a serious paper (where ‘upskirt’ photographs of female celebrities sit alongside reports of British soldiers killed in Afghanistan), announced that former British Prime Minister and co-architect of the Iraq war would take the reigns as editor for the day.

The reaction on the floor of the Evening Standard was much the same:

Prompting a backlash on Twitter, with users supporting the #BinBlair hashtag:

But Lebedev’s adviser, Amol Rajan, who is also a journalist with Independent, was more than happy to defend the decision: 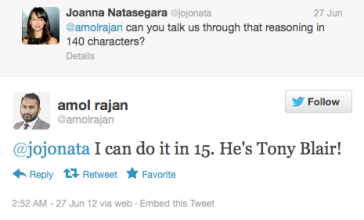 Among the journalist Twitter clique that attacked Assange though, gone was the vitriolic one-up-man-ship, gone were the supportive ‘re-tweets’ and nowhere to be seen were the rash blog posts deriding Blair for his alleged crimes. Channel 4 news’ Alex Thompson was one of the few who took to Twitter to point out the bitter irony of Blair becoming editor of the fourth estate: 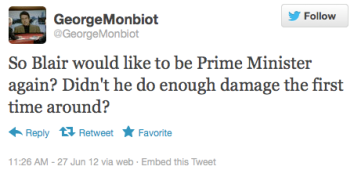 But Monbiot found no time to chide the Evening Standard or for that matter his own paper, the Guardian, whose editorial entertained a new era of Blair on the back of his editorial debut:

“John Major likened Blair’s long goodbye to Nellie Melba; the coming comeback must show he is more like Sinatra and Elvis” [Editorial, The Guardain, 29/06/12]

Is this the same Monbiot who challenged us to attempt “a peaceful citizen’s arrest of the former British prime minister, Tony Blair, for crimes against peace“?

The context of Blair’s return to the spotlight is equally if not far more controversial than that of Assange. It is only weeks since Blair was questioned by the Leveson Inquiry, a process instigated in part by the Guardian’s investigation of News International’s phone hacking, about his relationship with Rupert Murdoch.

As a major player in the media market the owner of the London Evening Standard also testified at the inquiry. He described how newspaper owners deserve access to politicians. 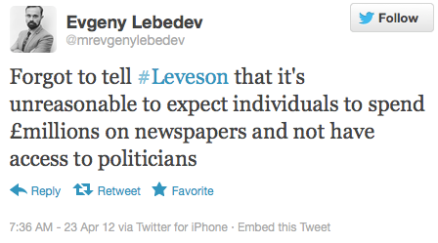 A position made more interesting when you put it in the context that his father, Alexander Lebedev, admitted the paper was always intended to be a loss making exercise.

“As far as I’m concerned this [buying the Standard] has nothing to do with making money. There are lots of other ways. This is a good way to waste money” [Luke Harding and Mark Sweney, The Guardian, 14/01/09]

And we now we have Tony Blair brought inside the paper as some sort of PR stunt to support his planned re-entry into politics. A return the Guardian then devotes a soft “like him or loathe him” editorial to. And only a handful of the uninhibited journalists who had their go at Assange days earlier voiced concern at a rival newspaper bringing in a man accused of war crimes as editor for a day.