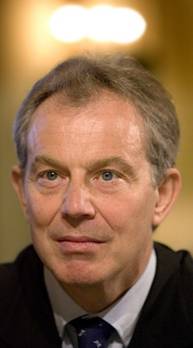 I’ve just read your article and I wanted to make a few comments, if you’ll humour me.

You argue that Blair’s decision to invade Iraq was a “mistake” and a “flawed decision”, but he contends that it was the right thing to do. He says he “can’t regret the decision to go to war” only that he “never did guess the nightmare that unfolded.” On this point he has been entirely consistent since 2003. In 2006 he said in conversation with Michael Parkinson that he will be judged by God, not by man: “If you believe in God (the judgement) is made by God.” To call the invasion a mistake is to negate his right to free will and absolve him from the consequences of his actions.

When he writes in his memoirs that “the intelligence on Saddam and WMD turned out to be incorrect…how this came to be so remains a mystery” we can take it for granted that he is attempting to conceal the facts. We are both aware the British government made numerous (ultimately successful) attempts to “sex-up” the evidence for an active WMD programme – for the very reason that the information provided by the inspectors and the intelligence community did not justify an invasion, there was no “imminent threat” and the UN would not allow military action. The very body that was set up with “the goal of preserving peace among nations.” It’s no mystery why the evidence was incorrect, it was clearly fabricated.

Further still, during a meeting in January 2003 between Bush and Blair in the White House they both expressed “their doubts that any weapons of mass destruction would ever be found in Iraq.” They talked about ways to “provoke a confrontation,” one of which, was to “fly US aircraft, reconnaissance aircraft, over Iraq, falsely painted in United Nations colors.” The same memo confirms that Blair thought it “unlikely there would be internecine warfare between the different religious and ethnic groups.” But this is because he chose to ignore the best advice he received.

In November 2002 six of the UK’s top experts on Iraq and international security warned Blair that the consequences of an invasion could be catastrophic. He was told “the regime had embedded itself into Iraqi society, broken it down and totally transformed it. We would be going into a vacuum, where there were no allies to be found, except possibly for the Kurds.” In February 2003 the Joint Intelligence Committee warned again that the threat from Al Qaeda “would be heightened by military action against Iraq.”

Blair’s post hoc justification for the war centres on Saddam’s threat to Iraq’s people. Yet Saddam’s greatest crimes took place during periods of support from the US and UK, so they cannot be used as a justification for an invasion a decade later. During the preceding years of the invasion Saddam did continue killing people, a lot of people, maybe even hundreds each year. However, the invasion and occupation resulted in the deaths of hundreds of thousands (some studies estimate a million dead). Not to mention the fact the war created nearly 4 million refugees. Whether they regret it or not, Bush and Blair have killed more Iraqis than Saddam. That is a horrific legacy.

Imagine that, and then try and compare it to Blair’s contribution to the North.

6 thoughts on ““He believed in peace. And peace came to pass.””