“The piece is also illustrated with some great shots of our “ghost estates”.”

To which I felt the need to respond:

The link brings Irish Times readers straight to the MyHome.ie database, within which the budding property tycoon can buy any number of houses located in so called “ghost estates”. 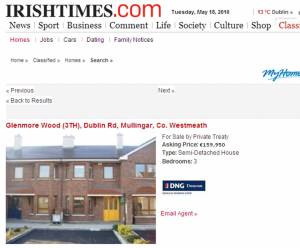 Which can be found on the ghostestates.com website here:

“I can’t speak for the property team but I don’t see what the issue is with the paper having profited from property advertising. I’m in negative equity myself. My decision to move house in 2007 was not influenced by ads in the newspapers. If you are making such big financial decisions on that basis you have only yourself to blame.”

And then back to me:

The ads are just one small part of it. I’m not saying the purchase of MyHome.ie in some way impinged on the journalistic integrity of the Irish Times, it was just a natural step for an organisation that had become increasingly reliant on property revenue. The Times, just like other papers, tended to promote a certain lifestyle that suggested investing in property was a sure thing. And this view wasn’t limited to the property supplement, which in effect became an advertising supplement as opposed a news supplement. The relative absence of alternative perspectives in the paper itself up until 2007 is evidence enough of this.

Fintan O’Toole acknowledged as much saying: “There is no question that almost all of the Irish media for the last 10-15 years has had a crucial economic stake in a rising property market… I’m not saying there is an absolute mechanical relationship between certain interests and what appears, but I am saying that the relationship exists.”

And Elaine Byrne noted only last month that “[t]he Icelandic banking inquiry found that the sources of independent economic analysis, such as the media and academia, were negligent in their obligations to display objectivity because of close links with banking interests.”

I’ve no interest in speculating on John’s personal motives for moving house in 2007, but to say that newspapers and the advertising they choose to carry don’t have a real input into the way society and the economy operates seems wildly out of step with the way the Editor sees the papers role.

2 thoughts on “Illustrating and Framing”