An Interview with Pepe Escobar, journalist and author 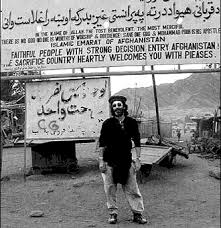 Pepe Escobar is a Brazilian born journalist and writer. He has reported from many different countries and conflicts over his career so far, including Afghanistan, Pakistan, Iraq, Iran, Central Asia, the US and China. He is a contributor to The Real News Network, a non-profit news and documentary network financed by its members; leaving it free from the pressures imposed by advertising, government and corporate funding. In his current role as the ‘Roving Eye’ of Asia Times Online, he is well placed to discuss world events and the ways in which they are interpreted and reported by international media. [1] [2]

Escobar has written in detail on the continuing conflict in Iraq and has been a continued source of unsanitised reality on the subject. In 2005, while many in the Irish media worshiped at the feet of US imposed ‘democracy’ in Iraq – ‘Poll success eclipses past blunders for US’ [Conor O’Clery, The Irish Times, February 1 2005] – Escobar pointed out the absurdity of what was happening: ‘History will salute it in kind: the US administration of George W Bush, parts 1 and 2, has introduced to the world the concept of election at gunpoint.’ [3] [4]

Pepe Escobar is also author of the highly recommended ‘Globalistan: How the Globalized World is Dissolving Into Liquid War’, and most recently, ‘Red Zone Blues: a snapshot of Baghdad during the surge’. [5] [6]

MB – In your opinion where does the major pressure influencing journalism come from? E.g. ownership, time and space restrictions, ideology, concepts of balance and impartiality, corporate pressures, PR agencies etc. And how does it manifest itself?

PE – Journalism is tremendously influenced by all these factors – and, to the detriment of independently minded journalists, they tend to overlap.

Ownership – Corporations, as we all know, rule most of the world’s media. Investigative journalism is the antithesis of shady mega-profits or corridors of power mega-deals. When ultra right-wing Murdochs and Berlusconis proliferate, there’s not much space left for critical thinking. The same goes in the developing world – from the Edwards family in Chile (who supported Pinochet) to the Marinho family in Brazil (who supported the military dictatorship). I have friends in some of Europe’s big papers in an utter state of despair – facing relentless tabloidization, some even refuse to write and just stick to sub-editing agency copy.

Time and space – “Efficient” journalism now means a newsroom filled with young people, still inexperienced, loaded with multitasking, facing merciless deadlines, working sometimes 12 or 14 hours a day, and on top of it getting meager salaries. Under these circumstances there’s no room for critical thinking, for researching and investing in a story long-term, for escaping what the French call “la pensée unique”. In TV newsrooms journalists are overwhelmingly reduced to cut and pasting feed from Associated Press or Reuters and adding a vapid voice over. Exceptions at the top of the food chain are some “clean” faces promoted by corporate management to star anchor status: the clearest example is “glamorous” poster boy Anderson Cooper at CNN, the butt of endless jokes among hardcore journos everywhere.

Ideology – This is essentially tied up with corporate pressure. Corporate ideology, except in very few cases, has nothing to do with social justice – as any reader of the US mainstream press will attest. Time Warner or News Corporation will never sacrifice their privileged ties with branches of the US government to break a major story. The best example is the blitzkrieg before the war on Iraq; some writers and editors knew the Bush administration was lying all along, but the New York Times, for instance, preferred to print crap provided by Ahmad Chalabi to Judith Miller on the front page virtually every day. When I was a foreign correspondent for a major national paper, every time I met the owner he was more interested in checking the Dow Jones index every five minutes than asking about what was going on in the world.

Balance and impartiality – Take a simple test: the Western coverage of the Iran – US nuclear row. Take virtually any copy by Associated Press or Reuters – translated and printed verbatim by all the major papers in the world. The premise is always that Iran is lying and the U.S. is just trying to get to the “truth”. Whatever is dished out by the White House, State Dept. or Pentagon is treated with reverence. Whatever comes from Iran is a “threat” – not to mention a lunatic raving. There’s virtually no balance and impartiality whenever corporate Western media treats contentious issues regarding the developing world. It’s an “us and them” mentality – not to mention a superiority complex – inbuilt in the copy itself, if not by the reporter certainly by his/her editor. During the Asian financial crisis in 1997 I remember thick American reporters with no understanding of Asia whatsoever crucifying then PM Mahathir Muhammad like he was the Anti-Christ– after all he dared to defy the Washington Consensus. Mahathir in the end turned out to be right – but the Western corporate press never admitted it.

MB – Hugo Chavez is a divisive character, sustaining almost constant criticism from certain Western powers. The recent defeat of his proposal to, among many other things, abolish presidential term limits, a move that would probably be welcomed by the US in Columbia, is already being framed as a defeat of dictatorship as opposed a success of democratic process, how can readers and media activists challenge this biased framing?

We don’t intend to say that a defeat for Chavez was necessarily a ‘success of democratic process’, but that it simply evidences the continued success of the process there and ridicules the cries of ‘dictatorship’. Unfortunately, if Chavez had won, the cries would no doubt be louder.

PE – Chavez is the perfect bogeyman for Western neo-liberal – or neo-con – elites and for their comprador classes in the developing world. He wants steady progress towards a socialist system – a real Third Way (not the Blair variety). And he is a mestizo [7] – we must never underestimate the racism factor when white elites have to deal with supposedly “inferior” natives. There were no less than 69 proposals at the recent referendum, but the right and the extreme right, in Venezuela and in the West, zeroed in on him taking power for eternity. The result of the referendum, according to some sharp Venezuelan analysts, turned out to be a blessing; it was indeed a victory for democracy, and Chavez once again proved he was a true democrat (compare with US supported Middle East dictators or autocrats; citizens in these countries have done it, and no wonder “Chavez of Arabia” enjoys tremendous street credibility).

The reaction of mainstream/corporate media everywhere, from South to North America and Europe, was muted – graphically enhancing the double standards. Since Chavez had lost, and gracefully accepted the result, he could not be damned as a dictator. But if he had won, dictator he would be, for life. What people can do to offset this kind of prejudice is to get informed. For instance, the website Venezuela Analysis, in English, offers a wealth of info on all aspects of the Bolivarian revolution, and it is duly critical when necessary.

MB – One of the interesting things you wrote in your latest piece, ‘Beat the (Red) Devil’, was that the majority of students in Venezuela support Chavez. This is not something that comes across in the mainstream media, where the anti-Chavez student demonstrations are wielded as evidence of the ‘intellectual left’s’ disdain for the ‘populist’ and certainly the fact they receive substantial support from the US is rarely if ever mentioned. This is particularly ironic when you consider the reception similar student protests would no doubt receive in the US. Is it that the pro-Chavez students are not vocal, or that the media is simply not vocal in reporting their existence? [8]

PE – The way Western mainstream/corporate media played up student protests in Venezuela looked like the whole university establishment was anti-Chavez. It was impossible to read anywhere that these students came from elite, private universities, were more interested in fleeing the country after graduation to snatch a MBA in the U.S., and were a minority. The majority studies in public schools, and they are chavistas with widely varied degrees of fervor. As for the intellectual left’s disdain for Chavez as a “populist”, this is a phenomenon observed all over South America. For Brazilian intellectuals who consider themselves social-democrats – starting with former President Fernando Henrique Cardoso, a close friend of Tony Blair’s – Chavez is nothing but a populist. Comprador elites in South America reason in block: whenever a charismatic politician strives for social justice, he’s derided as a “populist”. Wealth redistribution is the utmost nightmare of arrogant, corrupt, predatory South American elites.

MB – More generally, why is the Western media so interested in ‘Hugo Chavez’? Are there not more immediate concerns in Latin America?

PE – We come back to the “perfect bogeyman” theme – the ideal successor to El Comandante Fidel, former favorite Latin American Cold War bogeyman. The menu in the Middle East is much more diversified – we have had everyone and his neighbor playing the role, from Khadafi to Arafat to Saddam and now Ahmadinejad. Coverage of Latin America by English-speaking media is in most cases abysmal. In the US is minimalist. In Britain it’s basically disasters or deforestation of the Amazon. France, Spain or Italy dedicates more space to Latin America – but in many cases with an unbearable paternalistic strain, as in Spain. France offers a little more insight – but in the case of Chavez and Morales in Bolivia, for instance, it’s as if one’s reading a White House or State Dept. press release. There are endless crucial concerns in Latin America – but they don’t register, especially for hegemonic English-language media. There’s a language barrier – and there’s a lack of knowledgeable correspondents working on site. The BBC coverage of Latin America is pitiful – considering their resources. CNN in Spanish makes you want to shoot every talking head on screen.

Part 2 of the interview can be read here.