Iraq is suffering it’s bloodiest period in years, so it’s no surprise some deaths go largely unreported, but which ones?

“It was supposed to be a routine job, police say. Move 69 prisoners from an outlying town to a jail in southern Baghdad.” [Reuters, 27 Jun ‘14]

But those 69 prisoners never reached their destination, they were instead gunned down during a fire fight between the Iraqi army and the insurgent force of Islamic State in Iraq and the Levant (ISIL), according to army spokespeople that is. This is the second such mass killing of army prisoners in the last weeks.

Just 9 days ago Reuters reported that 52 prisoners were found in Baquba, a regional capital north of Baghdad, with “execution-style wounds to the head and chest”. Again, according to the government, the prisoners were said to have been killed by crossfire.

However, according to anonymous sources cited by Reuters, these prisoners were not the victims of stray bullets, but were instead summarily executed by their captors.

In Baquba, the New York Times reported that a source at the morgue said that “many of the victims had been shot to death at close range”.

While in Hilla, a police officer and a senior local official, speaking on condition of anonymity, told Reuters, “no attack took place, and the police had executed the 69 men”.

But, in contrast to the claims of mass killings made by ISIL earlier this month, these massacres have yet to be widely reported. This is despite reports by Amnesty International and tweets by Human Rights Watch’s Executive Director Kenneth Roth.

In the immediate aftermath of the killings there was some media interest, at the time when responsibility was attributed to ISIL. However, since the blame shifted, the interest has quickly waned – save for less than a handful of reports, the first by Reuters (republished by several other news organisations) and then by the New York Times.

Quietly at least, it seems the Iraqi government is sending a message to ISIL that it does not have a monopoly over mass killings.

The New York Times cited these two events as evidence of the return to a “familiar cycle of violence” between Sunni and Shia. At the very same time, evidence of deaths in Baghdad neighbourhoods are said to “fit the pattern of Shiite death squads during the sectarian violence in 2006 and 2007”.

Yet these aren’t the kind of events that form part of the broader narrative.

ISIL are still the only “extremists” in this conflict, while the Iraqi government and military, and the various Shia militias, are constantly said to be engaged in “counteroffensive”, responding to violence, and only engaging in it after their “patience had run out”. These executions, where they are referred to, are branded of a lesser evil than those of the ISIL led insurgency, unhindered by “a raw, sectarian quality“, despite being directed predominantly towards the Sunni minority. 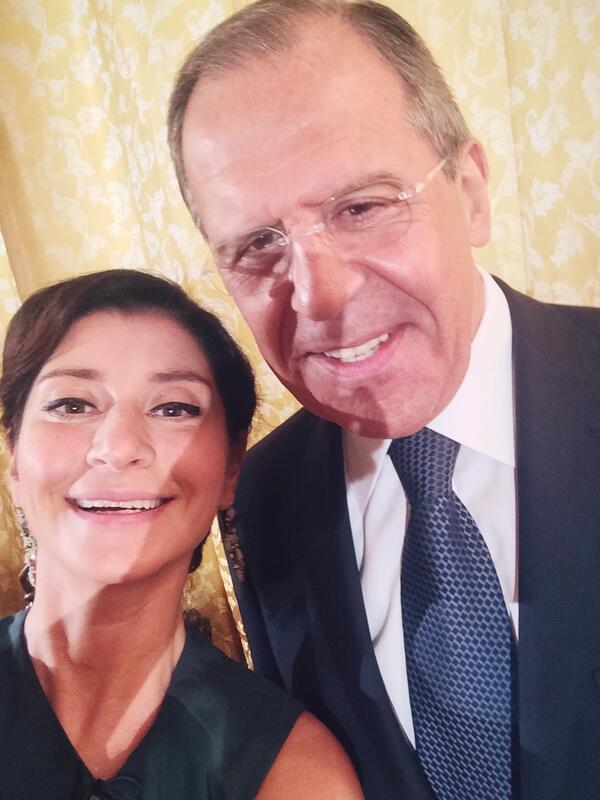 You would have thought the very public resignation of RT’s Liz Wahl would have nurtured a certain reluctance to display overt partiality, but clearly that’s not what has transpired.

Luckily, the western press is undistractible and can usually be relied on to step into this void of journalistic independence.

Unluckily for us, a juicy bone has been waved in front of these metaphorical dogs, in the shape of a photo.

The Washington Post asked: “Could this be the selfie to end all selfies?”

The Huffington Post claimed: “none of us can ever compete”

The Telegraph said: “The pair perfect their toothy grins”

Judge for yourself, I guess:

Blast from the past: In 2008 we organised a public meeting to discuss the reporting of the Iraq war in the Irish press. Several hundred people came along to watch a panel of experienced reporters, from both corporate and independent institutions, debate the topic (with more following the event live online at RTE.ie and the RealNews.com).

The following day the Irish Independent ran an inaccuracy filled (and predictably ill-willed) hit piece by columnist Kevin Myers. After a protracted exchange with the paper’s editor we submitted the following letter as response:

An element of paranoia?

We write in response to Kevin Myers’s article ‘My narrow escape from an ambush by the liberal left’ (Irish Independent, April 10) which attacks MediaBite and alleges all manner of fiendish plotting and ulterior motives behind our invitation to him to participate in the debate entitled ‘Reporting War’, which took place at DIT Aungier Street the night before Mr Myers’s article appeared.

Mr Myers’s excitement about our debate is as mystifying to us as it is inaccurate: names are spelled incorrectly, he skews the sequence of events he describes and misstates the context and nature of the exchanges we had with him prior to inviting him to participate in the debate.

Most Irish newspaper readers will be accustomed to Mr Myers’s indignation in the pages of the national media.

It is, arguably, generally understood that it is Kevin’s job to be continually working himself up about one thing or another and he has been doing splendid work in that regard for a long time now. What appears to be new in this article, however, is an element of what looks to us like paranoia.

We also believe, perhaps mistakenly, that the article was likely filed for publication before the debate had even begun.

Mr Myers clearly didn’t watch it at any rate — which would have been an advisable thing to do.

The consequences of that omission are sadly apparent in almost every line of the article.

As with most things in life, the explanation for all of this is the obvious one

MediaBite had a polite exchange of opinions with Kevin Myers about an item he had published in relation to the Iraq war.

As a media monitoring project, that is the nature of what we do. We posted this exchange to our website message board, where it can be seen for what it is.

Having placed himself front and centre in his imaginary scheme, Kevin Myers can only, it seems, conceive of the debate itself, its audience, MediaBite, the DIT, RTE.ie.

The Real News Network, the six debate panellists and its moderator (most of whom he takes sideswipes at, and three of whom had flown from the UK, Toronto and California to be present) — as all being mere props and/or dupes to aid us in our alleged objective: to “ambush” Kevin Myers.

He alone was to be the sole and true object of the entire plot.

The idea is made all the more absurd given that Mr Myers was not mentioned once in the course of the debate.

There is not even a particle of truth in Kevin Myers’s allegations about MediaBite, as we hope this letter makes evident.

We can only ask that readers of the Irish Independent take the time to watch the debate, which is available as a webcast on RTE.ie and linked to from MediaBite.org — and make up their own minds as to whether it was a devilish plot against Mr Myers by MediaBite or a worthwhile discussion about media coverage of an issue of serious concern to most Irish people.

END_OF_DOCUMENT_TOKEN_TO_BE_REPLACED

Morgan Kelly, one of the few economists who was proved right about the 2008 crash, talks about the future.

Challenged by ABC News’ (formerly BBC News’) Jon Williams to substantiate an observation made about the content of his tweets this handy infographic was made [click the image to see the full graphic]: