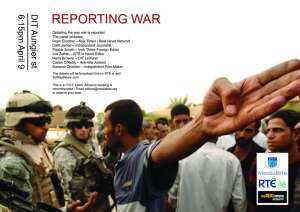 Hello and welcome to this discussion programme which is being hosted by the School of Media at the Dublin Institute of Technology in Ireland. My name is Miriam Cotton and I’m one of the editors of the media monitoring website called MediaBite.

MediaBite is an Irish-based not-for-profit project which sets out to critique mainstream news coverage for what we perceive as a drift towards an increasingly pro-corporate agenda in Irish news reporting – a tendency which we believe often leaves the reading, listening or viewing public with a biased impression of events. We owe our inspiration in large part to the encouragement and support of David Edwards and David Cromwell – editors of the similar UK website Media Lens and who are the authors of the book ‘Guardians of Power’ – an acclaimed analysis of British news media.

In an analysis we published last autumn, we criticised RTE online news reporting for seeming to accept unquestioningly the claims of anonymous US military sources about events in Iraq and, when we challenged them about this, for claiming that the eyewitness accounts of Iraqi people were ‘unreliable’. Eyewitness accounts are ordinarily a valued source for any journalist. What is it, we asked, that has brought us to a situation where journalists can so clearly abandon the principles of balance and fairness which are supposed to apply to their work? Is it now a matter of orthodoxy that the US is an impartial party to what is happening in Iraq? And is that apparent orthodoxy now being applied to US allegations about Iran? It was suggested that we organise a debate to discuss these questions and so here we are.

“Oil is unique in that it is so strategic in nature. We’re not talking about soapflakes or leisurewear here. Energy is truly fundamental to the world’s economy. The Gulf War was a reflection of that reality’.”

The US government has since publicly denied that the second invasion of Iraq 12 years after the first Gulf War had anything to do with oil or strategic advantage. And yet there is Mr Cheney on record claiming war in Iraq was about exactly those things.

Aside from some much-vilified columnists, internet bloggers and the alternative news media, we maintain that the majority of mainstream editorials, reports, front page headlines and broadcast news seldom reflects influencing factors and evidence like the statement quoted from Dick Cheney. Facts, figures, witnesses, official documents – any and all kinds of evidence was available to the media that cast serious doubt at least on the official rationale for war – long before the invasion of Iraq commenced – had the media chosen to acknowledge it. We also believe that the media routinely understates or ignores the true scale of public opposition to the war.

With all of the dead of the Iraq conflict –soldiers and civilians alike, the injured, maimed and 4 million displaced people of that country at the front of our minds, these points are the essence of the case we hope to discuss with journalists this evening. We’d like to express our thanks in advance to Harry Browne and the Dublin Institute of Technology, Joe Zefran and RTE – and to Geraldine Cahill and the Real News Network in New York – from where this programme is also being webcast. And special thanks also to our panellists for participating in the discussion – particularly to those who have travelled from other countries to be here.

I’m now handing over to Pepe Escobar of the Asia Times and Real News Network and who has very kindly come from Canada to facilitate the discussion.